In case there are any Leicester City fans who wanted to see their club involved in the Bruno Fernandes saga, this is finally time for it.

It’s not that the Foxes are looking to sign the Sporting star or anything like that. The Lions are looking to make a deal with the Premier League side in case they sell their best player.

Bruno Fernandes continues to be linked to a big number of clubs, including the likes of Manchester United and Tottenham. Now once again, people in Portugal believe he could leave very soon.

And to replace him, Portuguese newspaper A Bola claims Sporting would try to bring back Adrien Silva from Leicester City. 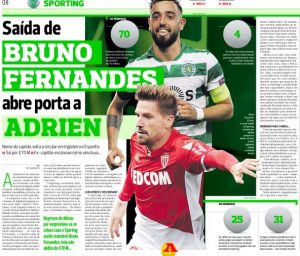 A Bola claims to have to bits of information. First one is that despite having a loan spell at Monaco, Adrien would be fine returning to Sporting now.

The Lions would like to have him on a loan deal as well, and although it may sound like an expensive operation, A Bola learned that the solution for that would be to split his salary with Leicester City. That’s the same type of deal Monaco have.

But for that to happen, Bruno Fernandes must leave the Lisbon side first. Both because they play in a similar position, and only his sale would help Sporting to afford the transfer.