English youngsters heading to the Bundesliga is in vogue at this moment in time, and Ademola Lookman is a player looking to take advantage of it.

The forward swapped Everton for RB Leipzig this summer, the Germans paying £16m to prise him away from Goodison Park.

It’s not the first time Lookman has played in Germany, having spent the second half of the 2017/19 campaign on loan with the German club.

He’s yet to get going in his second spell, managing just 11 minutes for his new club since moving in the summer transfer window.

That’s naturally caused a bit of interest, with some wondering whether the problems which stopped him becoming a first-team regular at Everton have followed him to Germany. 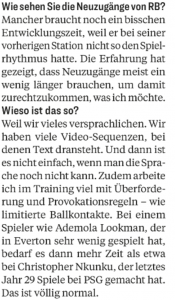 RB Leipzig manager Julien Nagelsmann insists that isn’t the case, though, explaining Lookman’s absence so far is a result of his lack of minutes with Everton last season.

“Some (new signings) still need a bit of development time because they did not have the regular game time at their previous clubs,” he told Kicker.

“Experience has shown that newcomers usually take a little longer to get along with what I want.

“We have many video sequences with text attached. And then it is not easy if you can’t speak the language yet.

“With a player like Ademola Lookman, who played very little at Everton, it takes more time than with Christopher Nkunku, who made 29 games at PSG last year. That’s completely normal.”