Real Madrid have completed majority of their incoming signings this summer, but they are still not done bringing new players to the club.

Zinedine Zidane has been pressing president Florentino Pérez to bring Paul Pogba to the Spanish capital.

Thursday’s edition of Sport claims ‘Zidane presses for Pogba’ as the Frenchman views signing the Manchester United star as vital for his side’s chances to fight for all competitions.

Los Blancos manager believes the addition of the World Cup winner will improve the side ‘exponentially’, which is why it is important for Zidane to have his compatriot for the new season.

Perez and Real Madrid have a problem here, mainly because Manchester United have no plans to sell the midfielder, which is why the operation is ‘stuck’ at the moment.

Reports in England suggest the La Liga giants are willing to pay €130m, which is €40m short of the Old Trafford club’s valuation.

Zidane has received this information and has asked Perez to make a ‘last effort’ to sign Pogba. He wants his club chief to ‘raise the offer’ for the former Juventus star.

The Real Madrid president will have to make a decision because it’s not just the transfer fee that needs to be considered. They will need to take into account the commission to be paid to Pogba’s agent Mino Raiola, if they go ahead with the deal. 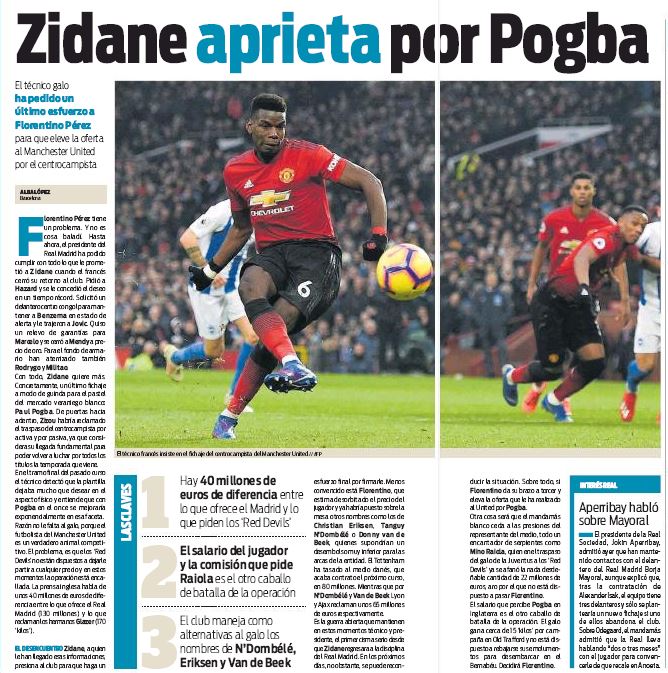 In addition to this, it’s stated the player, who earns €15m per season at Manchester United, has decided not to reduce his wage demands to join the Spanish side, despite earlier claims otherwise.

Perez believes the price of the operation to be exorbitant, Zidane seemingly doesn’t care.