On Tuesday evening, AS came out with a report stating Manchester United are ‘very close’ to signing Ousmane Dembélé for a fee between €50m and €60m.

It was also stated Barcelona will use funds from Dembélé’s potential sale to sign Lyon’s Memphis Depay.

Journalist Francesc Aguilar then provided an update explaining the Red Devils have succeeded in their efforts to convince the player to join them after Ed Woodward contacted both the winger’s camp and the La Liga side.

Today’s edition of Mundo Deportivo relays claims made by AS and then provides Barca’s stance on this case.

The Catalan club admits United ‘became interested’ in the wideman two weeks ago, but the potential move was dismissed because the 23-year-old refused to leave Camp Nou. 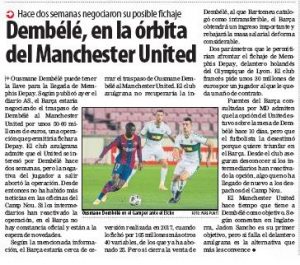 Barca sources have informed Mundo they have not received an offer from Ole Gunnar Solskjaer’s side, and are unaware if intermediaries have reactivated the operation to take Dembélé to Old Trafford.

Another Catalan newspaper Sport states United’s interest in the Frenchman isn’t new because he rejected a proposal from them in July.

That’s because Dembélé informed the club he has no intention to leave the Camp Nou. The report, however, adds ‘everything could change’, more so after Ronald Koeman left him out of the starting XI against Villarreal.

Sport states: ‘Now, Manchester United would have reactivated interest in signing the player and Dembélé could change his mind and accept the offer.’

It’s claimed Dembélé has now become the ‘main option’ for the English club after Dortmund rejected United’s offer for their No. 1 target, Jadon Sancho. 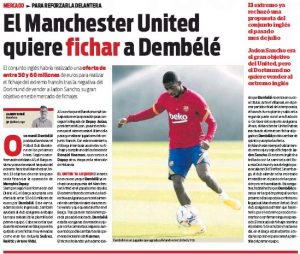 It’ll be interesting to see whether United will make an improved bid for Sancho or whether they will they accept defeat in their chase for the England international and try signing the ex-Borussia Dortmund man.

Whatever United decide, they need to act fast because the transfer window will close on October 5th.