On September 29th, we carried a report from Sport, who said Espanyol’s Marc Roca has ‘aroused interest’ from Sheffield United and Burnley.

Wednesday’s edition of the same newspaper has a report on the midfielder, stating his exit from the club is ‘getting closer and closer’.

Espanyol were relegated from La Liga last season, and they are looking to lower their wage bill and also raise funds by offloading some of their players.

Roca and his representatives are aware he’s ‘first on the list’ to leave the club.

It’s claimed the Spaniard welcomes the offer, and as per the report, everything indicates the proposal has come from the Premier League, where Sheffield United and Burnley have ‘shown interest’ in him.

With less than a week left in the transfer window, Espanyol need to rush to close the 23-year-old’s sale. Sport states there could be news with regards to this in a day or two. 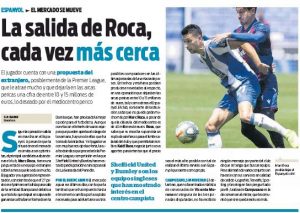 The player is aware his exit will come as a ‘breath of fresh air’ for Espanyol, and has asked his agent to try and get as big a fee as possible, as his last service to the club.

Although Sport discusses Roca welcoming the offer, and interest from the Blades and Sean Dyche’s side, the newspaper doesn’t specifically mention if the proposal has come from either of the two Premier League clubs.