The 27-year-old, who joined the club from Shakhtar Donetsk in 2018, has detailed his improvement at the Red Devils and how happy he’s been at Old Trafford.

Speaking to reporter Leonardo Escudeiro, Fred first talked about the squad’s gesture of donating 30% of their salary to the NHS, and how captain Harry Maguire had a big part in the decision.

“I think we always have to do good to those who need it, and whoever has a better condition can, yes, help,” Fred told Trivela.

“So, the group, especially Harry, who’s the captain, along with Ole, created this initiative, and we embraced it and went together, because we know it’s important at this moment. I was one of the first to say OK and I also help people in Brazil through my projects, a lot of people need donations. It’s always good to help others, to help those in need. Not only for those who will receive the aid, but for the whole society.”

Having arrived at Manchester United before manager Ole Gunnar Solskjaer, Fred talked about how he’s seen the Norwegian boss.

“Ole is a great coach. He’s still a young guy, he’s going to grow a lot in football as a coach. He was a player, he understands how the player feels, and this is important for us in the squad. He added a lot, had a lot of experience as a player and is now starting to have that experience as a coach. He always helps us on the pitch, talking, he’s a very good guy, and I’m happy to be following his transition at United. I’m sure he will grow a lot, get a lot of experience and that he will become one of the great managers.”

Fred once again gave a lot of praise to Michael Carrick, who’s been giving him help in his adaptation to the club and to English football.

“Michael Carrick is an assistant coach who helped me a lot in this process of adaptation and transition. He’s a guy who’s an idol at the club and was a great player in the same position that I play. On a daily basis, he always helps me a lot, he’s always talking to me. After training, we always do a little work to complement it. Sometimes finishing, sometimes passing, long balls. He’s a guy who understands the game, who lived it. And it’s impossible to have anyone better than him to help me there. He knows about the difficulties, the shortcuts, and he tries to show me everything there in training, in games. He’s a guy who has huge importance for me at United, and I’m very grateful to him.”

Regarding academy players who’ve been joining the first team this season, Fred was quizzed about those who’ve been impressing him most. And it seems he has a favourite.

“They are great players. The club has an important role in using many academy players, they have this history of using the kids that come up from the academy, they stay in the first team and make history at the club, and this process is important. They’re great players, with a lot of potential for the future. All are very good, they’re not in the first team for nothing. But who impresses me most is Jimmy Garner. Not because he’s in the same position as me, but he’s a player who has an impressive vision of the game, has a huge future for United. In addition to the impressive game vision, he always plays with his head up, has an impressive shot, an incredible pass. He’s a player that I admire a lot.” 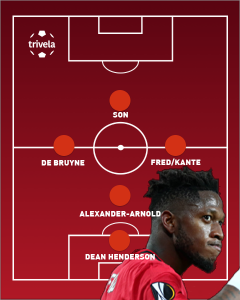 Finally, Fred was asked to pick a five-a-side team, with the only rule being he couldn’t choose Brazilians or other Manchester United players.

“It’s difficult to choose a player who’s not from United or Brazilian (laughs). There are many Brazilians standing out in the Premier League. But let’s go: for goalkeeper, I’d choose Henderson, I think he’s a great player. For defence, I’d choose Alexander-Arnold, who’s been doing a great season, is a good right back. There in the middle, I or Kanté would play. I really like Kanté, I admire him, he’s a guy who has great football. And, at the front, I think I’d choose De Bruyne and Son, they are two great players that have been standing out. Son is another guy that I admire a lot.”