One of the new big stories in the Rome based press these days is Lazio’s interest in Luis Suárez.

We’re obviously talking about the Watford loanee and not the Barcelona star, as the Colombian’s performances on loan with Real Zaragoza have caught the eye of a number of clubs, including Simone Inzaghi’s.

The scouting has mostly been done by their director of football, Igli Tare, who is said to have been following Suárez ‘for some time now’, and Lazio are hoping they have a trump card up their sleeve in the agency that represents the 22-year-old.

The striker is managed by You First Sports, who so happens to be the same group that oversees the affairs of Luis Alberto and Jony, two Spaniards currently enjoying themselves in Rome.

Lazio’s plan for Suárez is fairly simple, according to Corriere dello Sport: use Watford’s precarious position in the Premier League to their advantage and give him a pay rise if he were to join them. 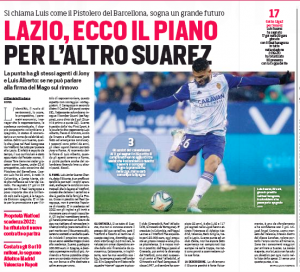 It’s stated that, so far, the Hornets’ attempts to renew the forward’s contract (which expires in 2022) have been ‘ignored’, and the Serie A side would be prepared to offer him close to €1m/year, with bonuses and that figure increasing year on year.

The belief is that Watford would ask around €8-10m for the young striker – a nice profit on the €150k they originally got him for from Itagui Leones – which remains a very affordable fee for a player that could eventually replace Ciro Immobile when the time comes.