That’s according to Marca, who explain the Red Devils are the club that yearns ‘most strongly’ to take the defender.

The new Manchester United coach wants a centre-back who is comfortable with the ball and the 25-year-old ‘fits perfectly’ into his plans. Therefore, the Premier League side are ‘willing to reach’ the €50m fee need to sign him.

Claims made by Marca are echoed in today’s edition of El Periódico Mediterráneo.

Having turned down Tottenham Hotspur last summer to fulfil his dream of representing the Yellow Submarine in the Champions League, ‘the time has come’ for the centre-back to take the next step in his career.

The 25-year-old’s agents, Jose Manuel Tarraga Valero and Vicente Fores Cornejo, ‘plan to travel to Manchester this week’ to negotiate the contract details, if United can ‘reach an understanding’ with Unai Emery’s side for the transfer. 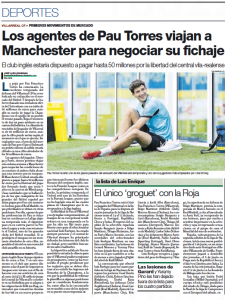 Manchester United being ‘willing to pay up to €50m’ for the defender puts them ahead of La Liga sides.

Torres’ preference is to stay in Spain, but it seems the next step in his career will be in England, and ‘more specifically’ at Manchester United.

Villarreal must raise funds to balance their budget and if Torres were to be sold in the region of €50m, he will be the club’s record sale.