Paul Pogba’s comments at the weekend about leaving Manchester United have already spawned endless claims around Europe about who will replace the Frenchman at Old Trafford.

In Spain it’s pretty much taken for granted that he’ll be signing for Real Madrid, so there’s claims about the Premier League going after various options in La Liga.

In France, it’s allowed L’Equipe to push Manchester United forward as an option to sign Neymar. All of sudden, it’s thought PSG are considering selling the player, even if they’d be looking to get back the rough €220m they spent to recruit him.

Repeated injuries in recent seasons and off the pitch issues may have made PSG consider a sale, but it’s not bringing the price down.

Manchester United are one of ‘very few clubs’ with the conditions to sign the Brazilian, with the others named as Barcelona and Real Madrid.

L’Equipe say that with a Pogba exit, the English club would be ‘willing’ to give Neymar the ‘keys’ to the reconstruction effort. 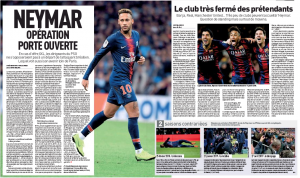 It would be a huge signing for Ole Gunnar Solskjaer’s side, but probably not in the way they’ve been planning. The French newspaper, despite presenting Manchester United as a serious candidate, don’t seem to have any real information, and are presenting assumption as the genuine situation.