Home Premier League Liverpool ‘I have a debt to pay’ – Liverpool player in phone call...
SHARE

According to Hurriyet, Liverpool loanee Loris Karius has played down speculation about leaving Besiktas this summer as he wants to win the Super Lig title next season with the Turkish side.

The German joined the Istanbul club on loan after falling down the pecking order at Liverpool.

Hurriyet reporter Ismail Er claims Karius made a phone call to Besiktas board member Umut Guner and he’s reportedly said he wants to continue his career in Turkey with the Black Eagles.

They paraphrase him as saying: “I have a debt to pay to the Besiktas fans. I don’t want to leave and I am not considering my options.

“I want to stay at this great club. I will work hard to become better and I want to win the title with my club next season.”

We recently covered claims from Turkey that AS Roma and Werder Bremen are showing in the Liverpool goalkeeper but Hurriyet say he’s now settled in Turkey, so would like to continue his career with Besiktas. 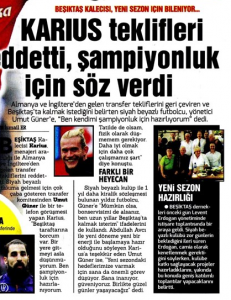 It remains unclear what will happen next summer when his two-year loan spell in Turkey ends.

There have been some claims in the Turkish press Besiktas don’t want to use the mandatory option to sign him permanently from Liverpool.

His form last season was up and down, with reports Besiktas could replace him with Fulham goalkeeper Fabri.