It may be a coincidence, but on Monday both L’Equipe and AS go big on Paul Pogba’s desire to leave Manchester United.

The French newspaper reported the player is still determined to get himself away from Old Trafford, and they even presented the possibility of using FIFA’s Article 17 to force an exit, although that feels unlikely at this stage.

AS have Pogba on their front page, saying he’s now ‘closer’ to signing for Real Madrid.

The Spanish newspaper report the midfielder’s priority is moving to Madrid over Juventus or renewing with Manchester United, and they say this is the message coming from people close to the player.

Pogba is on a contract lasting until June 2021, with his current club having an option to extend that for a further year. However, AS states such an extension would be ‘illogical’ because it would ‘anger’ the Frenchman.

A member of the player’s entourage is quoted as saying: “They would only make the player angry and have him unhappy for another year.” 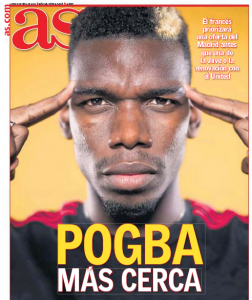 AS believe Pogba’s price has now dropped below €100m, because of how the Covid-19 crisis is impacting football, and due to his injury hit season.