With all the talk of Matteo Darmian potentially being included in a deal with Inter that would see Ivan Perisic go the other way to Old Trafford, a few outlets have forgotten other clubs are also interested.

While the move to Inter makes sense, they aren’t the only ones keen on a new fullback, as Roma are also trying to bolster their left-flank.

Despite not being a natural in the position, Darmian’s ability to play there has caught the eye, as he finished the season there under José Mourinho, who doesn’t particularly want to see him leave.

Much like César Azpilicueta at Chelsea, the Italian defender seems like he could find his place in the Special One’s first-team down the left rather than the right, and that’s why the Red Devils have slapped an €18m price tag on him.

This is, at least, what Il Messaggero are reporting on Monday, as they look at the options Monchi has in front of him to help improve Roma’s defence for next season, saying Manchester United will want ‘at least’ the aforementioned figure for Darmian. 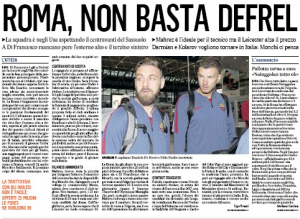 What could work in the Serie A club’s favour, however, is that the Italian newspaper make it clear the 27-year-old would like to return to his home country ‘as soon as possible’.

While that is hard to prove without the player saying it himself, it isn’t the first time we’ve heard it.

We’ll have to wait and see, but our gut feeling is that, if he isn’t included in the Perisic deal, he isn’t going anywhere.