Daley Blind got 77 minutes for the Netherlands on Monday evening against Italy and it was a mixed bad, report De Telegraaf.

The Manchester United player is in a difficult situation with his club future under much doubt, and his international future dependent on convincing Ronald Koeman he’s one of a handful of players who are essential for Oranje.

Both situations are up in the air, and De Telegraaf explain it’s irritating Blind. Whilst it’s stated the player needs a quick departure from Old Trafford, questions about a move seem to ‘irritate’ him, and a post-match interview on Monday is presented as an example.

The Dutch newspaper doesn’t detail exactly what was said, but it’s stated TV channel Veronica asked Blind about searching for a new club and it became a ‘very uncomfortable interview’. 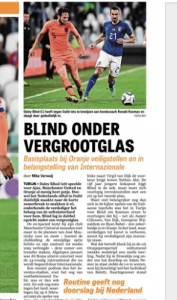 There could be some good news as far as interest is concerned. Whilst it’s claimed AS Roma was concrete in the winter market, now it’s Inter Milan who are keen on the player.

There’s no claims of any transfer talks or a potential fee, just that Blind is being ‘coveted’ by Inter. The Italian side are linked with as many players as Manchester United, perhaps even more, so it’s still to be seen if this one goes anywhere.

Just don’t ask Daley Blind about it, because his interview response has clearly shown De Telegraaf he’s irritable about a move.