Barely getting a game under José Mourinho at Manchester United despite costing the Premier League club a pretty penny when Louis Van Gaal was in charge, Memphis Depay was shipped out to Lyon during the January transfer window.

Since his move, the Dutch winger has enjoyed a relatively decent start to his Ligue 1 career, scoring five goals and picking up three assists in 11 league games so far.

The French club’s fluid system going forward has certainly helped him, yet that isn’t exactly a coincidence, considering the lengths to which his agency went to try and find him the perfect club for his post Manchester United career. 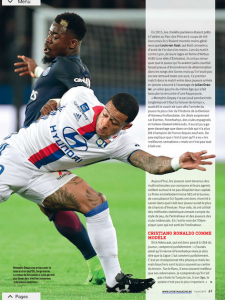 Sport/Foot Magazine in Belgium reveal on Wednesday, that while the 23-year-old could have gone to clubs such as Everton, Fenerbahce, or others in Spain and Italy, SEG chose Lyon as their client’s destination because of what a computer told them.

Wanting him to restart his career after the false start at Old Trafford, Depay’s agency used football’s equivalent to match.com, with statistical algorithms taking into account style of play, manager and the players already at the interested clubs to find the best fit, with Lyon popping up as the ideal partner.

Agreeing to lower the generous salary he was earning at Manchester United, the Dutch international appears to have found the ideal place to get back on track, one where he will still get to play European football, as well as challenge for a couple of trophies.