Every couple of days or so there’s an update in the Portuguese press on Nelson Semedo, and links with Manchester United and Barcelona.

O Jogo carry it on in their Sunday edition, but don’t seem overly keen to push their latest slant as any real update. Patience is the word of the day, as it becomes increasingly clear that Barcelona aren’t quite as interested as Benfica may have hoped, and Manchester United look like the only club in town for Semedo.

And even Jose Mourinho’s men aren’t currently banging down the door.

O Jogo state that Manchester United initiated contacts to sign Semedo in January, and things have rumbled on since then.

There was even talk of the Premier League club 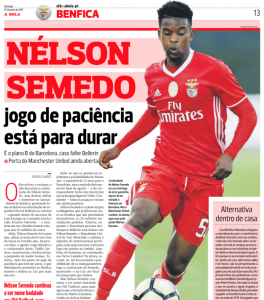 securing Semedo in the winter window and keeping him at Benfica until the summer, something which didn’t materialise.

The idea of signing the right-back ‘remains popular’ at Old Trafford, explain A Bola, and he could be a replacement in Mourinho’s squad if Matteo Darmian moves to Juventus.

However, it’s looking increasingly likely that Benfica will struggle to get as high a fee as they would have wanted.