Home Europe Man United in talks for defender, asked for discount, could ‘advance in...
SHARE

Yesterday, we covered the return of the rumours involving Manchester United and Benfica defender Ruben Dias.

Newspaper Record said the Red Devils had scouts at Benfica’s first preseason friendly, and kept an eye on the 22-year-old, for whom they had already started talks.

Now on Friday, it’s newspaper Correio da Manhã who brings a bigger story claiming that the Old Trafford side are ‘advancing’ for the defender.

They confirm that Manchester United went to watch Dias on Wednesday, and are now pondering the possibility of making an attempt to sign him. 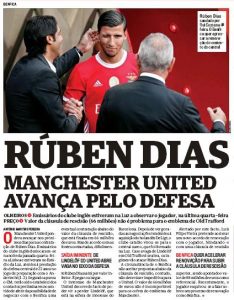 Correio da Manhã says that the Red Devils spoke to Benfica regarding the possibility of signing Dias for less than his €66m release clause. However, the Eagles are hardly making a discount, so this is his price tag.

It’s claimed that Manchester United are looking to Dias because of the possibility of losing Victor Lindelof to Barcelona.

This sounds like a very opportunistic claim, with it being highly unlikely Lindelof goes to Barcelona this summer.

Although Manchester United asked for a discount, the €66m release clause isn’t thought to be an issue for the Premier League side. That’s why Benfica president Luís Felipe Vieira is willing to accelerate the process to renew Dias’ contract, raising his release clause to €88m.

Napoli move into picture to sign Leicester City player – Could...