European clubs are back playing, and even though there are only friendlies being disputed for now, the scouts are already hard at work.

Manchester United rarely miss a Benfica game, and it isn’t any different in the summer. As reported by newspaper Record today, the Red Devils had emissaries watching Benfica’s friendly against Anderlecht on Wednesday.

We normally don’t cover these stories, even during the season, because Manchester United literally watch almost all of Benfica’s matches, and it doesn’t mean they’re moving for one of their players.

But Record add something interesting to the story, which is that Ole Gunnar Solskjaer’s side are one of those who started negotiations for defender Ruben Dias. 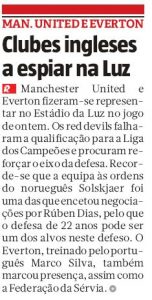 They don’t make it clear if these negotiations are still underway or if they’ve been finished.

They just say he could be a target for the English side in this transfer window.

We’re pretty certain they’re not making new claims here, otherwise they would use other space to report it, but it had been a while since United were last linked to the 22-year-old.

Several reports in Portugal have been saying that Benfica and Dias are close on agreeing a new contract, raising his release clause from €66m to €88m.

However, it hasn’t been made official yet.