PSG beating Manchester City to Dani Alves leaves them a right back extra. With the Brazilian now added to Serge Aurier and Thomas Meunier, the favourite to leave right now is the Ivory Coast international.

Left out of PSG’s preseason tour, Aurier is being lined up for an exit, but now PSG need to find a club that both wants him, will pay their asking price, and can get a work permit sorted out.

Both Manchester City and Manchester United are keen, according to Sunday’s edition of L’Equipe. The French newspaper state that Manchester United have returned to the offensive ‘in recent hours’, suggesting Jose Mourinho is considering the transfer.

It’s not the first time this transfer season that Manchester United have been linked. Back in April there were even claims of a done deal, which proved to be incorrect.

L’Equipe believe a deal can be completed at around €20-25m which is a reasonable price for a fullback in the current market, but the newspaper say there’s a limited market.

For Manchester United and Manchester City there’d also be the issue of a work permit, with Aurier refused entry to the UK in November to play against Arsenal.

That was mainly due to a case hanging over 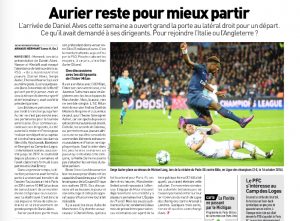 Aurier since May 2016 relating to violence against police.

Mourinho has no glaring need for a right back but if Matteo Darmian were to leave, as part of the deal to sign Ivan Perisic for example, then 24 year old Aurier could be an option.