“Patience is bitter, but its fruit is sweet”.

As quotes go, it’s quite a good one, and it’s one football fans around the world will hope is true.

Take Inter, for example, who are currently suffering setback after setback in their attempts to sign Manchester United’s Romelu Lukaku, and need to wait for either the Red Devils to lower their demands or someone to come in and buy one of their own players for a lot of money.

However, they haven’t given up all hope, keen to eventually get to taste the delicious outcome of their persistence, and they’re leaving that to the Belgian’s agent.

According to Corriere dello Sport, Federico Pastorello is currently in his London office, still working with Manchester United his client’s exit via his ‘market men’ and ‘contacts with Ed Woodward’. 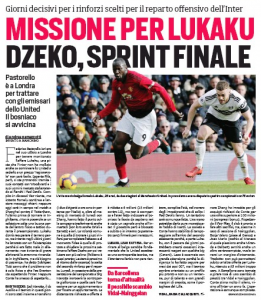 Unfortunately, all this talking doesn’t appear to be getting anywhere, as the Italian newspaper make it clear that unless the Red Devils are prepared to accept an Inter player as part of the deal, a transfer remains unlikely.

Corriere do ask if all this work from Federico Pastorello is a ‘downhill task’, and while they refuse to admit defeat, you’ve got to think the thought of giving up must be creeping in?

It won’t be over until August 9th (at the earliest), but barring a miracle, this looks close to dead in the water.