Fenerbahce are looking to add a defensive midfielder to their squad for next season and they’ve been linked with a number of players this summer.

Tottenham Hotspur’s Victor Wanyama is said to be a midfielder the Yellow Canaries are tracking but bitter rivals Galatasaray are also reported to be interested in signing him.

Turkish newspaper Fotomac have reported on the latest developments with regards to Wanyama’s future, and they claim Fenerbahce are close to signing the Tottenham player on a temporary basis.

It’s reported the Turkish side have convinced Tottenham over a loan deal and are currently in talks with the player over a potential move.

According to Fotomac, Wanyama wants to stay with the Premier League side but is aware his chances playing regular football are decreasing. 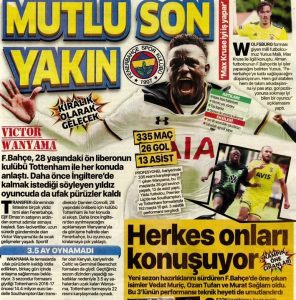 Fener sporting director Damien Comolli has used his personal contacts with Tottenham to get the nod ahead of Galatasaray, having worked with the London club a few years ago.

Last season Wanyama was hampered by injuries and made just 22 appearances in all competitions.

The Turkish media are often overly optimistic about the chances of loaning Premier League players.