Heavily hinting he was thinking about a transfer away from Old Trafford last week, Romelu Lukaku has now officially told Manchester United he wants to leave this summer.

This is what Gazzetta dello Sport are reporting on Tuesday, explaining that following his international break outburst, the striker reached out to the Red Devils to express his desire to try something new elsewhere.

Lukaku reportedly considers his Manchester United experience has having come to an end, clearly frustrated at losing his starting spot to Marcus Rashford early on in Ole Gunnar Solskjaer’s tenure.

The Norwegian took six games to hand Lukaku a start, and never seemed fully confident in the 26-year-old’s ability. 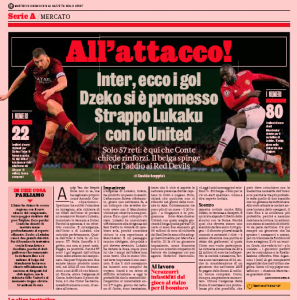 Manchester United’s inability to qualify for the Champions League will undoubtedly have also played a part, and it’s no surprise the Belgian is eyeing up a move to Inter, who qualified for the elite European competition on the final day of the season.

Despite Soccer Link’s previous claims that a deal should be struck ‘in the coming days’, Gazzetta maintain we’re some way off a conclusion.

Mauro Icardi is expected to be with the Serie A side on July 7th when pre-season starts, and it seems highly unlikely that Lukaku’s transfer would go through with the Argentine still at the club.

The Italian newspaper do suggest something could happen after that, and they even wonder which shirt the forward will be wearing when Manchester United play Inter on July 20th.

That could make for an awkward reunion if he’s not in red.