The outlet claims that the Red Devils have been following the 18-year-old’s development this season, and are impressed with both his defensive and attacking skills.

O Jogo writes that manager Ole Gunnar Solskjaer wants someone who can compete with Luke Shaw on the left-back position, and isn’t happy with the performances of Brandon Williams so far.

Nuno Mendes has the same agent as Bruno Fernandes, and that’s why his name was on the table when Manchester United signed the midfielder back in January. 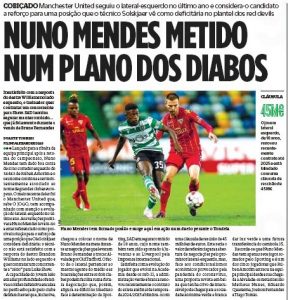 Even though the clubs didn’t find a deal for Mendes back then, O Jogo says a deal could be easier this time due to the agent’s good relationship with both sides.

The left-back is currently protected by a release clause of €45m, but due to the Coronavirus crisis, O Jogo says Sporting could accept a lower offer.