With the UEFA Nations League international fixtures now behind us, we are facing a two to three day gap in the media where there isn’t a lot to talk about football wise.

This means newspapers have some extra space to fill, which means double page spreads on stories that don’t deserve it, like Corriere dello Sport on Manchester United’s Marcus Rashford potentially going to Juventus.

Yes, we know, we can hear your scoff from here, but the problem is that this is the kind of story that will get blown out of proportion in certain parts of the English media because it comes from Italy when the reality is the Italian newspaper don’t add much, if anything, to it.

The original story came from England, which Corriere jump on, despite being aware that nothing would happen before at least this summer, since his contract keeps him at Old Trafford until 2020 (with an option for an extra year). 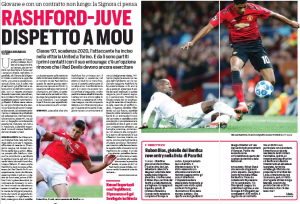 Much of the article is about his current situation at Manchester United, and how he is performing a bit better for his country than he is for his club.

It’s not until the end of the article that they “contribute”, and that’s us being generous, by saying he “could become a serious candidate for the black and white shirt next summer”.

Where would he play? Instead of Paolo Dybala, of course, who, would you believe it, “is of interest to Manchester United”.

You see? Just because you see ‘according to Italian reports’ in a UK outlet doesn’t mean there’s concrete information in it as, most of the time, especially in a story like this one, they simply tend to be relaying what’s already been said in England.