If the reward for dropping down the pecking order at Manchester United could be a move to Barcelona then Daley Blind will surely grasp it.

Marca, admittedly more a Madrid leaning newspaper, on Thursday report that Blind is an option for Barcelona, whether that be in January or next summer.

The Dutchman’s contract ends in June but Manchester United have the option to renew that for a further year at any time, something accepted by Marca. However, it’s stated that Blind’s decreased importance at Manchester United could be a help for any transfer.

Barcelona have been interested in Blind since 2014, it’s stated, but since then Marca believe his ‘career has stalled’. Just 3 Premier League starts this season, despite Jose Mourinho dealing 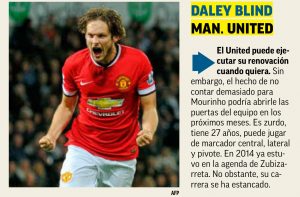 with injuries, would help back that stance up.

Earlier this month De Telegraaf reported Blind hadn’t heard anything from Manchester United on a renewal, although they expected the extra year to be used.