Juventus director Fabio Paratici has spoken to the Italian media this Monday, and of course, most of his words were about the transer market.

Newspaper Tuttosport continues to have a story for each Juventus player, and in Mario Mandzukic’s case, they continue to feed the rumours which link him to Manchester United.

Fabio Paratici continues to make it clear that the Croatian international should soon be off from the Old Lady, although the club are still to find the best solution for his future.

“He stayed a bit on the sidelines at the club, because there was a transfer taking place in Qatar and we wanted it to remain quiet. It didn’t materialize, now we will talk to him and the agents to find the best possible solution”, he said. 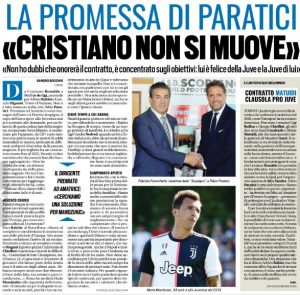 Now although Tuttosport has been saying Manchester United are the main contenders for this signing, this time they add that the player has the chance to move to China.

It’s worth recalling that a couple of days ago, the very same newspaper said there was a ‘broad agreement’ for the Red Devils to sign Mandzukic, as he should land at Old Trafford in the January window.