No matter how much it gets put to one side, the Chris Smalling situation still hasn’t been resolved, but rest assured, everyone involved is trying to get something done.

That’s what Gazzetta dello Sport are reporting on Wednesday as the Manchester United loanee prepares to return for the last few games of the campaign.

Down the player’s end, the defender has ‘expressed to everyone’ his decision to stay at AS Roma, which is why the Italians are ‘looking to find an agreement’ with his home club and are in ‘daily contact’ with this week potentially being ‘decisive’.

The Serie A club want to have him available for the August Europa League fixtures, with the list of selected players needing to be given on the 3rd. 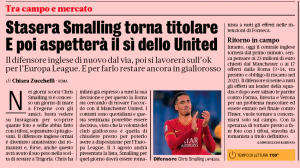 The two clubs are currently some way apart with their wishes regarding Smalling, as Ed Woodward wants €23m for his defender, while Roma have only offered a loan with an obligation to buy totalling €17m so far (€3m up front and €14m after), meaning there’s still a ‘€6m’ difference between the two.

Returning from injury against Inter for 16 minutes off the bench, the Manchester United player will start from the off against SPAL on Wednesday evening.