It had been a few days since we’d seen anything Jorginho related, but the Italian media can’t go too long without mentioning the former Napoli midfielder’s name.

Gazzetta dello Sport are the culprits as they go through what Maurizio Sarri wants and needs to ensure next season goes far smoother than the current one has.

Shadowed by Lazio for a good part of the campaign, Juventus never felt fully comfortable at the top of Serie A, and their manager believes one man could go a long way to remedy the situation: the Chelsea midfielder.

The two know each other very well from their time at Napoli and Stamford Bridge together, and the Italian has placed the 28-year-old ‘top of the list’ since he appears to have fallen out of favour under Frank Lampard of late.

However, this would all come at a cost, especially since Chelsea paid €40m to acquire him in the first place and his value has hardly dropped following decent performances. 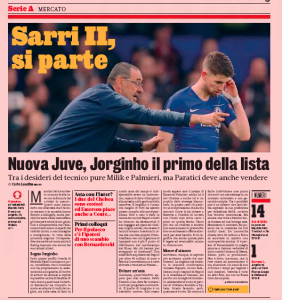 Furthermore, Gazzetta point out Marina Granovskaia ‘isn’t used to selling at a cut-price’.

The same can be applied to Emerson Palmieri, a second name on Sarri’s list, and the fact Inter have also taken an interest doesn’t help.

Juventus aren’t really prepared to enter an ‘auction’ with their league rivals, making it all the more difficult.