Manchester United’s Edinson Cavani has struggled with multiple injuries this season. His poor fitness and the tough competition provided by Cristiano Ronaldo has restricted the striker’s appearances.

The 34-year-old has just over seven months left on his contract. The Red Devils parted ways with Ole Gunnar Solskjaer and are now close to appointing Ralf Rangnick until the end of this term.

Despite the Uruguayan’s recent struggles at United, he has managed to draw interest from Barcelona.

Saturday’s edition of Mundo Deportivo claims Cavani could be one of the solutions to solve the La Liga side’s ‘lack of goals’. His experience of playing in big teams and his scoring record meet the requirements of the Catalan club.

It’s claimed the former Napoli star ‘would love to wear’ the Barcelona shirt, as he sees a move to the Camp Nou ‘with good eyes’. 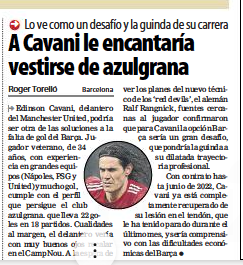 Cavani wants to know where he fits into the new Manchester United manager’s plans. While he waits to find out, sources ‘close to the player’ have informed Mundo that Barca would be welcomed as a ‘great challenge’ for the South American. It would be the ‘icing on the cake’ for his career.

The United attacker is aware of Barcelona’s delicate economic situation and Mundo say Cavani ‘would be sympathetic to their financial difficulties’.