Friday saw reports in Spain explaining Barcelona have an interest in signing Manchester City’s Ferran Torres in the winter market.

‘Operation Ferran Torres’ is written in bold on the front page of today’s Mundo Deportivo.

Mateu Alemany and Ferran Reverter were in Manchester yesterday, talking with Citizens officials about the winger, who is one of the ‘express requests’ made by Xavi Hernández.

Alemany knows the player from his time at Valencia and shares a good relationship with his agent, Héctor Peris.

The La Liga side and the Spain international ‘already agree on what is essential’ for the latter to arrive at the Camp Nou. His desire to return to his country, coupled with Barca’s ‘great appeal’ has ‘served to reach an agreement in principle’ with Xavi’s side. 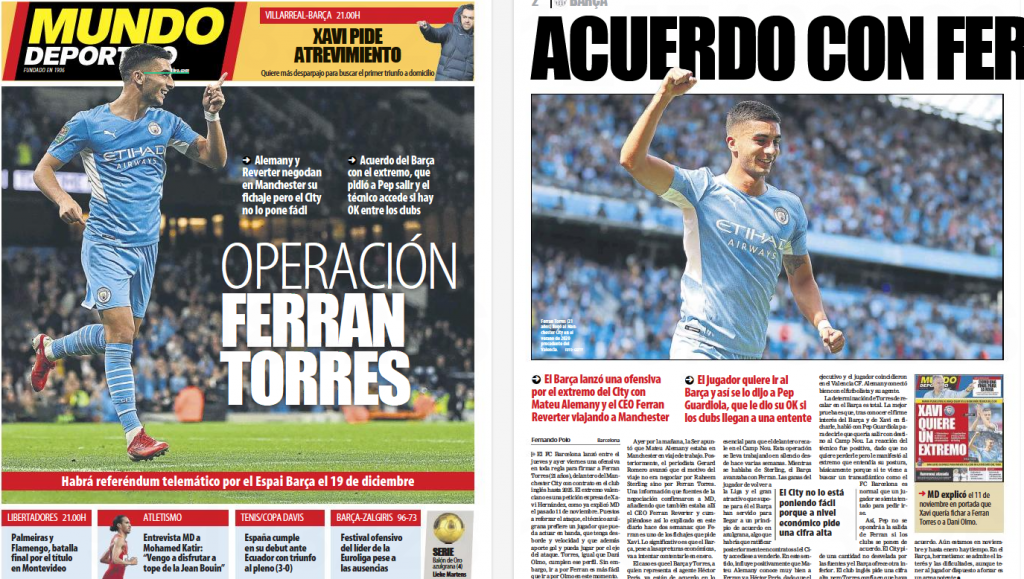 Torres’ determination to join the Catalan club is ‘total’. It’s again claimed he spoke to Pep Guardiola, after finding about the Blaugrana’s interest. The former Bayern Munich manager will ‘not oppose’ the transfer, as long as both clubs find an agreement.

City are ‘not making it easy because they ask for a high offer’. Barca are offering lower than what is demanded. Despite all this, Torres is confident ‘there will be an agreement’.

Sport also have the Etihad forward on their front page, with ‘offensive for Ferran Torres’ written in bold.

It’s claimed Xavi has given his approval to sign Torres, and the negotiations between the two sides are ongoing. ‘It will not be easy’ for the Camp Nou side to sign the Spaniard.

Sport say the Premier League winners are ‘willing to listen’ to proposals, if the starting offer is from €50m. Barca, on the other hand, are ‘looking for imaginative formulas with which to reach a satisfactory agreement for everyone’.

There is already an agreement in principle between Torres and Barca. The latter now need to agree a deal with City for Torres to arrive at the Camp Nou.