On January 20th, Sport reported Manchester United have regularly met with the agent of Ousmane Dembélé and are ‘ready’ to sign the Barcelona player in the winter market.

The winger’s contract expires in June and he’s refused to sign a new deal at the Camp Nou so far.

Mateu Alemany, the La Liga side’s sporting director, revealed on Thursday that the player and his agent have been told to seek a transfer before the end of the winter market.

Later that day, the 24-year-old took to social media to state he has “full confidence” in his agent to take care of his off-field situation and also stressed he will not give in “to any blackmail”.

Mundo Deportivo on Friday claim the Red Devils are one of the clubs that ‘most tempt’ the France international. It is also stated the Premier League side have been ‘following him for a long time’ and they ‘aspire to hire him’.

Journalist Xavier Bosch, writing for the same newspaper, explains Xavi Hernández’s side can part ways with the ex-Borussia Dortmund man in January since they already signed Ferran Torres, and Ansu Fati has regained full fitness.

Barca still need to bring in a forward this month and Álvaro Morata, who is currently on 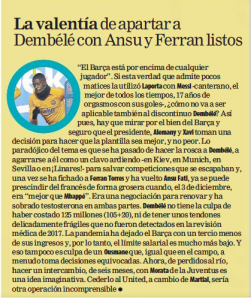 loan at Juventus from Atlético Madrid, and Anthony Martial are among their targets.

The Frenchman has publicly admitted he wants to leave Old Trafford in January.

Bosch believes a swap deal involving Morata and Dembélé with Juventus is an ‘imaginative idea’.

The journalist has also warned Barca that loaning Dembélé to Manchester United in exchange for Martial would be another ‘incomprehensible operation’.