Lyon president Jean-Michel Aulas explained via his Twitter account that his side are still in the race in signing Barcelona defender Yerry Mina after Sport reported that Everton are edging closer towards completing a deal for the Colombian international.

Today’s edition of Mundo Deportivo reiterates that apart from the above mentioned two clubs, Manchester United are also interested to secure his services and the three clubs were active in their pursuit of signing him on Monday.

Marco Silva’s side are still pressing to complete the deal, but the Red Devils and the Ligue 1 side are not far behind.

Jose Mourinho’s side has ‘already closed an agreement’ with the player and even submitted a proposal, similar to that of Everton, on Sunday. 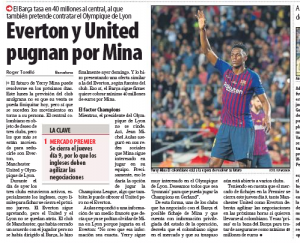 The newspaper does not mention the fee the two English clubs are willing to offer, but it is not close to the La Liga winners’ asking price of €40m. So far, Barcelona have not agreed a deal with another club and the player is still on the market.

Manchester United are ‘fighting’ with Everton for Mina and these two clubs will have until Thursday to complete the deal for central defender.

The situation can be resolved in the next few days.