On August 4th, Mundo Deportivo reported Everton club have made a ‘strong proposal’ for Yerry Mina along with Lyon and the defender’s uncle, Jair, who is also his representative had urged Barcelona to consider it.

Today’s edition of Catalan newspaper Sport claims the La Liga winners have ‘reached an agreement’ with the Merseyside club to allow the centre-back move to Goodison Park in the final week of the transfer window in England.

Manchester United are also interested in the player and Colombia’s RCN Radio reported the 23-year-old “will play for United, 90%”.

It was also claimed that Marco Silva’s side and the Ligue 1 club had submitted bids for the player.

Sport now claims that Jose Mourinho’s side’s decision to end interest in the ex-Plameiras man in the ‘past few hours’ has allowed Everton to facilitate a move for Mina. 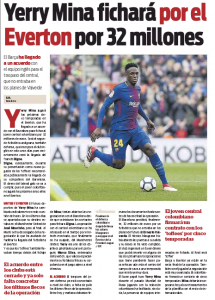 Marco Silva’s side has offered €32m, and Sport say it’s been accepted by the Camp Nou outfit.

The former Palmeiras man will sign a five-year deal with Everton, according to these latest Catalan claims.