Back in 2017, Manchester City took part in a strange deal for Geronimo Rulli involving themselves, Uruguayan club Deportivo Maldonado and Real Sociedad in Spain.

At the time, we explained the situation: “The Citizens bought the Argentinean goalkeeper from the Uruguayan side, loaned him to the La Liga side, who then bought him six months later.

At the end of all this, Manchester City appeared to have made a small profit, and were said to have included a clause giving them 30% of a future sale.”

Fast forward to 2019, and Real Sociedad still own the player, who has impressed in recent weeks, but Manchester City’s presence is still felt.

Mundo Deportivo have an article covering the situation on Tuesday, where they explain the ins and out of the deal, and the power Pep Guardiola’s side currently hold. 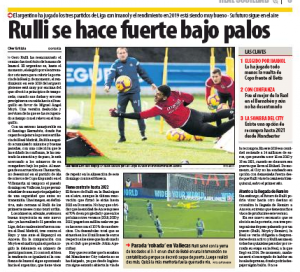 Let’s start with the current facts: Geronimo Rulli is contracted to Real Sociedad until 2022, and, as things stand, Manchester City still have that 30% clause.

However, as of this summer, the Spanish club will be able to slowly buy back that clause… 10% at a time over the next three years in €1m instalments.

Down Manchester City’s end, the Premier League club, also starting this summer, can potentially purchase the Argentine thanks to a buy-back clause that increases every year over the next three seasons.

In 2019, the Cityzens could simply pay €14m and once again own Rulli if they want to have him as Ederson’s backup.

An interesting situation, and one to keep in mind going forward once Claudio Bravo (who is expected to return in March from his Achilles injury) eventually leaves the Etihad.