Good news for the Premier League sides who are interested in signing Shoya Nakajima from Portimonense.

The Portuguese press brings today quotes from the player speaking to Japanese TV, in which he explains he’s not keen on moving to Al Duhail, who have been heavily linked to him in the past few weeks.

“At this stage of my career I want to continue to play in Europe,” said Nakajima (via Record).

The newspaper makes it clear that these quotes don’t guarantee that he’s staying at Portimonense, as some English clubs are still keen on him. 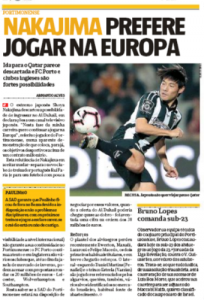 Record says that Leicester City, Southampton and Wolverhampton Wanderers could all still make offers of around €20m for the Japanese star in January.

The outlet just claims not to be sure if Portimonense would sell for that amount, since Al Duhail’s offer was said to be €38m.

It’s worth recalling that Wolves were really close on signing Nakajima, in a deal which was confirmed as ‘80% done’ by Portimonense, but some late details (likely money) made the transfer collapse.