Home Europe Man City will not allow arm to be twisted for transfer –...
SHARE

For the past week or so, multiple reports have discussed Barcelona’s interest in Eric García.

On Thursday, Pep Guardiola confirmed the centre-back has decided not to sign a new contract at the Etihad. His current deal expires in 2021.

Since then, Sport and Mundo Deportivo have explained Manchester City are demanding €23m plus €12m in variables for the defender.

Guardiola left the 19-year-old out of the starting XI in his side’s 2-1 victory over Real Madrid on Friday, and fielded Fernandinho alongside Aymeric Laporte in the heart of the back four.

Today’s edition of Mundo states García ‘took a toll’ for wanting to leave [omission against Real Madrid] and they once again explain the Citizens wanting a similar fee [€23m + €12m in bonuses] to what they paid for Ferran Torres.

It’s claimed the Premier League side will ‘not give it’s arm to twist easily’, and Txiki Begiristain ‘wants to take advantage of the situation’ by earning more through the teenager’s transfer this summer.

He claims the Catalan club will not meet the English side’s valuation to sign defender. They value the player around €10m, and if there’s no reasonable agreement, Barca will looking to sign García on a free transfer next year.

Rico states Barca will not even offer half (fixed fee plus variables included) of what City paid for Torres.

Quique Setién’s side trump card is that García wants to return to the Camp Nou.

Should Barca fail to sign him for a reasonable price (€10m) this summer, they will wait until January. He can sign a pre-contract agreement with clubs outside England from the start of next year.

Should García join Barca as a free agent next summer, the only concern which needs to be resolved is how to ‘financially understand the footballer’s uncomfortable wait in Manchester’. 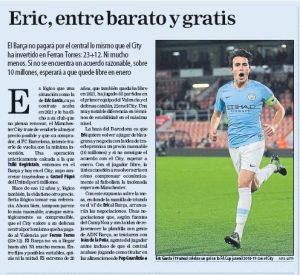 Considering this factor, Barcelona will start negotiations for the defender’s signing, knowing that they have “yes” from the player.

City will have to make a decision, whether to risk losing García for nothing next year or accept a lower fee of his sale this summer.