Manchester City’s Eric García has less than a year left on his contract and Barcelona are keen on signing this summer.

On August 6th, Marca reported the Citizens have offered an extension, and if the defender decides against committing his long-term future at the Ethiad, they would cash in from his sale.

It was explained the centre-back’s price tag would approximately range between €15m and €20m.

Pep Guardiola has confirmed the 19-year-old has communicated to the club that he will not sign an extension.

After the manager made those comments on Thursday, Sport came out with a report stating the Premier League side want €23m plus bonuses for the Spain U21 international.

The English side paid €23m plus €12m in bonuses to Valencia for Ferran Torres’ services this week. They now want a similar payment structure for García.

Friday’s edition of Mundo Deportivo echoes claims made by Sport regarding the price tag, and they further provide their own stance on this case.

City have argued 20-year-old Torres and García’s profiles are similar [because of age and protential], even though they play in different positions.

Barca, however, view it differently because the winger has more first team experience than his compatriot. Having said that, the La Liga side ‘welcome Man City’s predisposition’ to negotiate for the central defender’s transfer. 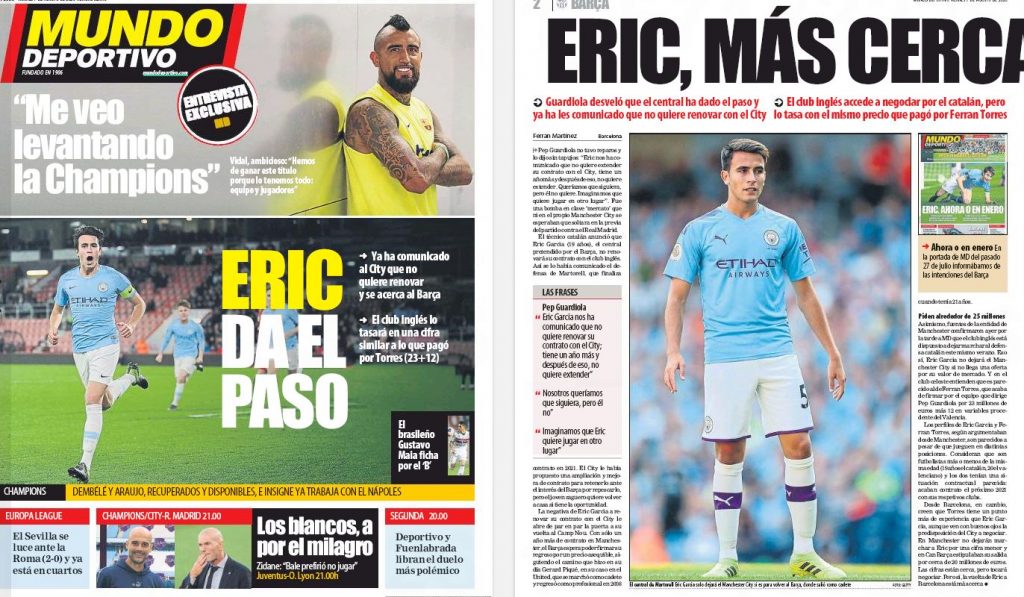 Guardiola’s side are unwilling to lower the price tag, while Barca believe a deal can be concluded for €20m.

Mundo state ‘the figures are close’, but it will be necessary for Barcelona to negotiate with City.

Despite City’s stance on García’s asking price, the newspaper is of the belief ‘Eric’s return to Barcelona is closer’.

Over at AS, they explain the player’s decision to reject the contract offer confirms his ‘real will is to return to Barcelona’.