Bayern Munich failed in their efforts to sign Leroy Sané in the summer, but their president Uli Hoeneß admitted his side could make an attempt to sign the Manchester City star in January.

The winger suffered a serious injury in August and despite the German international’s current situation, Sport Bild claims the Bundesliga winners will resume talks with his management in the coming weeks as he still remains a key target for them.

Bayern had allocated €200m for signings in the summer, but they spent over €140m and recovered in excess of €50m from player sales.

The report states Bayern will not negotiate directly with the player without Manchester City’s permission and as they did in the summer, they will use the help of intermediary Giovanni Branchini to ‘create conditions for the transfer’. 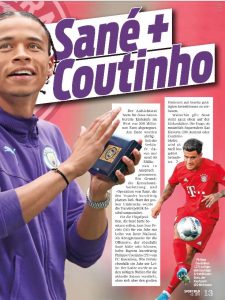 Sané is represented by David Beckham’s football agency and Branchini has been in close contacts with David Gardner, who represents them.

Through the Italian, Bayern wants to create the conditions so that City agree for their player’s sale.

Sport Bild also adds Sané’s asking price is ‘likely to decline’ from €150m since his contract ends in 2021 and he’s already turned down a chance to extend.

It’s believed that if the situation doesn’t change, there’s a high chance Pep Guardiola’s side could sanction the sale next summer.

Bild point out City are under financial surveillance and they state Financial Fair Player (FFP) regulations could also force the English champions to cut their ties with Sané, if he doesn’t sign a new deal.

Bayern are also interested in Bayer Leverkusen’s Kai Havertz, but other deals will depend on how their talks with City progress for Sané.