Bayern Munich were chasing Manchester City’s Leroy Sané in the summer, but any efforts to sign him suffered a blow after the winger picked up an ACL injury in the Community Shield against Liverpool in August.

According to Sport Bild, the Bavarians are still chasing the former Schalke man and this has also been confirmed by their president Uli Hoeneß.

The German publication also talks about Sané’s teammate Gabriel Jesus and suggests the Bundesliga winners had an opportunity to sign the striker in the summer.

It’s claimed the Brazil international was offered to Niko Kovač’s side and Manchester City informed Bayern they were willing to talk about the 22-year-old’s potential sale for less than €100m.

However, Bayern decided against pursuing Jesus as Sané still remains their main target. 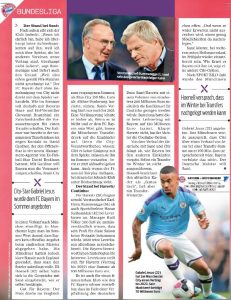 Jesus has seen his playing time limited as and started in only 10 league matches since the start of the last season.

Speaking to Esporte Interativo, the attacker admitted last week that he was disappointed with the limited playing time, but stressed he has no plans to leave Pep Guardiola’s side.