Is it a coincidence that Manchester City have been linked with a move for Stefan De Vrij a few days after Pep Guardiola made it abundantly clear that his squad needed a new defender? Not really.

Does it make sense? Yes, it absolutely does.

Over the past few months, Liverpool have clearly been the Premier League side in the driving seat to sign the Dutch centre-back, yet everyone knows their top priority is Virgil Van Dijk, and the Lazio man is just an alternative.

Approaches have been made, but everyone is waiting to see whether or not the 25-year-old signs a new contract with the Serie A club as his current deal expires in June 2018.

Corriere dello Sport are the ones with the update on Friday, claiming De Vrij is ‘very undecided’ about putting pen to paper, with the release clause still an issue in the negotiations. 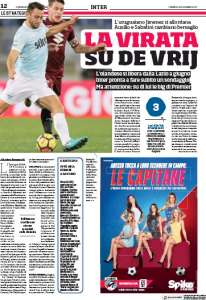 Furthermore, he knows he can get a lot of money next season if he just waits until January and holds talks with other clubs, so the offer to keep him at Lazio needs to be just right.

Much like Liverpool, there’s every chance Manchester City won’t wait until then and will end up offering the Serie A club an offer to buy the centre-back as early as next month, which, in the grand scheme of things, could suit the Italians more as they’d end up with cash in their bank.

He’s cheap, he’s good, can speak Dutch and he’s had severe injury problems in the past.

If he isn’t the ready made replacement for Vincent Kompany, we don’t know who is.