Despite being linked with him a number of times and scouting his progress throughout the season, Manchester City and Everton are going to have to go up a gear if they want to sign Marash Kumbulla in the summer.

We say this because L’Arena in Italy published an article on Thursday reporting that Inter were in pole, and that Chelsea were pushing to try and get in the lead.

The Blues could reportedly offer up to €23m for the young defender, while Inter have already held talks with the player’s representatives about a move.

That doesn’t mean Manchester City and Everton aren’t still around, however. 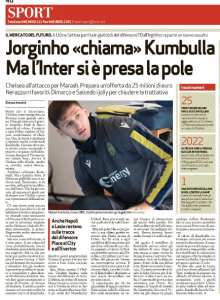 The newspaper explain the Cityzens and the Toffees have been following the defender since after the season kicked off, ‘a little bit later on’ than Manchester United, who started taking notice after his summer training camp with Verona in Austria.

Regardless of who comes knocking later on, L’Arena make it clear Kumbulla is ‘spoiled for choice’, as Inter are in pole with ‘the others chasing’.

That includes Pep Guardiola’s and Carlo Ancelotti’s side, and it’ll be up to the 20-year-old to decide which step is best for him to take in his career going forward.

Everton eyeing double swoop – Ancelotti ‘pulling strings’ for one, Brands on the other

Belief move to Italy would be to Tottenham player’s ‘liking’ –...