Porto striker Moussa Marega is back being linked with a departure from the Portuguese side today.

It’s newspaper A Bola who says the club have promised him he could leave at the end of the season, and given their need of money, they’re really letting him go in a few months.

Once again, it’s claimed he’d like to move to a better league, and the chase from Leicester City and West Ham United is recalled.

It’s said both clubs have shown interest in the past, and they end up being the only two sides who are named in the story. 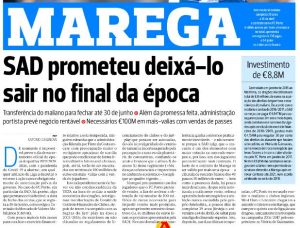 Regardless of when the season will end due to Coronavirus, A Bola says Porto need €100m in sales before the end of June, so they can stay fine with Financial Fair Play.

Marega is entering the final year of his contract, and it’s claimed that his release clause has recently gone down from €40m to €30m. That sounds like a good price for Leicester and West Ham, but it’s worth pointing out that the striker isn’t having a great season this time, with only nine goals scored so far.