Italian newspaper Tuttosport today has an article about the ‘auction’ which is expected for Dinamo Zagreb midfielder Dani Olmo.

They say Juventus have been interested in the player, but will have to join a big battle for his signing, since the likes of Manchester City and Barcelona are ‘in the front row’ to get him.

They say this is the main reason Olmo is about to become an expensive player, along with him doing well in the Champions League and that he’s made his debut for the national team.

While Barcelona are looking to bring back one more La Masia player, as they’ve done before, Manchester City’s interest in him is said to be due to a ‘request’ from Pep Guardiola. 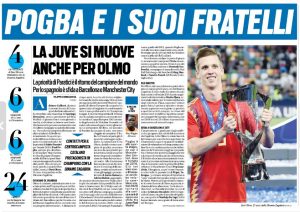 As usual, Tuttosport tries to prove that Juventus can compete for such a signing, claiming the purchases of Cristiano Ronaldo and Matthijs de Ligt have proven the Old Lady have the strength to get world class players.

Now we wait and see how far this auction will go if all these clubs really try to get the 21-year-old.