In one more of the many José Mourinho stories the Portuguese press brings today, it’s claimed that he rejected the chance to take charge of Real Madrid to accept the job at Tottenham Hotspur.

Newspaper Correio da Manhã has an article saying Galacticos president Florentino Perez was ‘counting’ on having the Special One at the club next season.

A source close to Mourinho told Correio da Manhã that ‘only family reasons’ would have convinced him to accept the offer from Spurs.

It’s claimed the manager will make €8m net per season at Tottenham, and that’s €5m less than what Real Madrid had been offering him. So, if the claims of a Madrid offer are true, perhaps there more to it than being close to his London home. 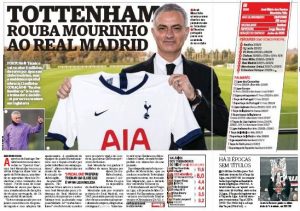 The headline from Correio da Manhã reads ‘Tottenham stole Mourinho from Real Madrid’, and they highlight the fact that ‘The Special One preferred training a club who are 14th in the Premier League’.

That sounds at least like a little dig to Spurs, but it can’t be long before the Portuguese media are all aboard the Tottenham train.