Towards the end of the transfer window, the future of Stefano Okaka became a very prominent part of Watford stories as the veteran forward was in need of a new club.

Unused by now former manager Javi Gracia, the 30-year-old was attracting attention from a couple of clubs, including Besiktas in Turkey.

We covered those stories throughout, and while talk of an agreement being reached was reported, the striker ended up swapping Vicarage Road for Udinese, where he had spent the second half of last season on loan.

The transfer fee wasn’t revealed, but the Okaka signed a three year contract with the Serie A side, and the player revealed the reasoning behind his return to Italy instead of trying something new abroad. 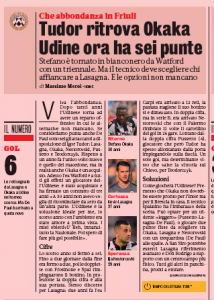 He said, relayed by Gazzetta dello Sport: “At 30 years old, I didn’t want to start from scratch again. Udinese was the ideal solution for me. Last year, it was love at first sight with the atmosphere. My objectives? The national team of course. And I hope to score lots of goals”.

With Roberto Mancini trying to rejuvenate an ageing Italy squad, it is likely to take a huge effort from Okaka to convince the former Manchester City manager to pick him over the likes of Ciro Immobile and Andrea Belotti.

But, as we all know, things happen very quickly in football, and you can never say never.