Javier Hernández left West Ham United and completed a switch to Sevilla on deadline day of the European transfer window.

The Mexico international joined the Hammers from Bayer Leverkusen in 2017, but failed to feature regularly for them and scored 16 goals in the Premier League.

Manuel Pellegrini’s side added Sébastien Haller to their squad in the summer and the 25-year-old’s arrival restricted the former Manchester United man’s chances of starting regularly for West Ham.

Sevilla manager Julen Lopetegui admitted the striker was keen on joining the La Liga side, which is why they went ahead and completed his signing.

Hernández was part of the national team for the friendly tie against the United States and Argentina and on Tuesday, he gave an interview to TUDN, which is relayed by Mundo Deportivo.

The 31-year-old enjoyed his time at Old Trafford earlier in his career and has compared the move to Sevilla to joining the Red Devils.

“For me to go to Seville is like going to Manchester [United] or Real Madrid. Sevilla is a Triple A [top level] team,” he said. 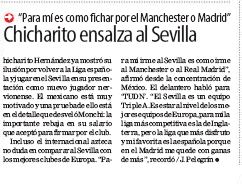 “…for me the most competitive league is in England, but the league that I enjoy the most and my favourite is Spanish because at [Real] Madrid I was left wanting more.”