Home Europe Liverpool have made offer of ‘around €70m’ for player, summer move, father...
SHARE

Insigne to Liverpool is back

It’s February 4th, a few days after the close of the winter market, and yet transfer stories are still all around Europe, with Lorenzo Insigne to Liverpool returning in Italy.

Clubs who do their planning properly will already have a rough idea of the type of players they need to add to to squads, which enables them to get a step ahead of the competition.

Monday’s edition of La Repubblica says agents are already planning for the summer, and that includes Mino Raiola.

It’s explained Liverpool are interested in Napoli’s Lorenzo Insigne, something which has been mentioned several times in the past. So keen are Jurgen Klopp’s side, according to the Italian newspaper, that they’ve made an offer of ‘around €70m’ for him.

The offer arrived in sterling, €70m is the conversion… although no sterling amount was published. 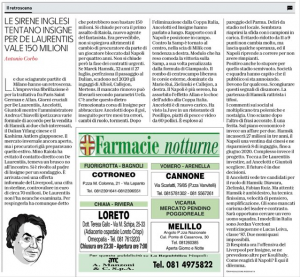 That offer wasn’t made directly to Napoli.

La Repubblica say Raiola was hesitant to contact the club’s president directly. He went via the player’s father, but De Laurentiis still got his answer in.

Liverpool surely wouldn’t go up to such an amount, even if the interest is correct.

Insigne is 27 years of age, and has a contract with Napoli lasting until June 2022. He last renewed in April 2017, so a renewal could be on the cards soon.

So far this season the Italian international has played 19 Serie A matches and scored eight goals, adding a further five assists for his team.

The Napoli player is right footed and has spent this season in a role for his club which sees him drift to the left to pick up the ball and start attacks for Carlo Ancelotti’s side.

Currently second in Serie A, the Naples club are nine points behind leaders Juventus.