Dutch newspaper De Telegraaf have a big feature in their Saturday edition on Steven Bergwijn and the interest the PSV player is receiving.

It’s Jurgen Klopp’s side who get the most words, with it being detailed just how closely the club are following Bergwijn. De Telegraaf say for interested sides it’s only really performances against other top Dutch clubs that matter, such as Ajax and Feyenoord.

Bergwijn has managed to impress in these games, but Liverpool have been sending an official to almost every match since the winter break anyway, not just concentrating on the bigger clashes.

As yet there’s been no approach to PSV so there’s no decision to make either for the Eredivisie side or the player. Even if that happens, De Telegraaf clearly believe there’s a chance the 20 year old winger will choose to continue in Dutch football for another year, continuing his development. 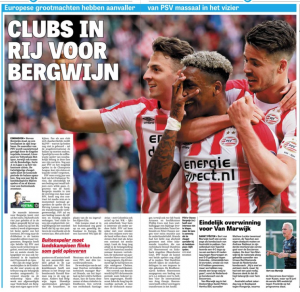 English clubs have been linked before and aside from naming interested sides, and detailing Liverpool’s trips, the Dutch newspaper don’t bring a great deal more on the matter.