Home Championship ‘On the way to England’ – More from Portugal on Nottingham Forest...
SHARE

Earlier on Saturday we covered Record’s big story about Nottingham Forest being in ‘advanced talks’ to sign João Carvalho.

Benfica are once again looking to raise some cash and the 21 year old midfielder has been earmarked as a possible exit. Linked to both Wolves and Leeds United last summer, Record said Carvalho had been ‘very close’ to joining Nuno Espirito Santo’s side.

The Portuguese newspaper pointed out the deal isn’t done, and said there’s interest from other clubs as well.

A Bola also cover it, going with a headline saying ‘DIOGO GONÇALVES AND JOÃO CARVALHO ON THE WAY TO ENGLAND’

The players are ‘one step away’ from joining ‘historic’ (they love the traditionally big English clubs) Nottingham Forest.

Diogo Gonçalves, also 21, is a left winger who can play across the attack. Funnily enough he was also strongly linked to Wolves last summer, and then in March was picked out as a ‘priority’ signing for Leeds United, although the Elland Road links seemed to be built on shaky foundations.

A Bola state there’s a ‘basis of understanding’ on the deal, but it’s not yet sure if it would be a loan or permanent transfer. A loan deal wouldn’t bring the cash Benfica are always looking for, but would give both players a platform in the Championship.

O Jogo, a third Portuguese newspaper, report there are ‘ongoing negotiations’ and Benfica have been happy to talk. It’s believed by O Jogo that whilst the initial idea was a loan, Nottingham Forest aren’t against changing that to a permanent transfer. 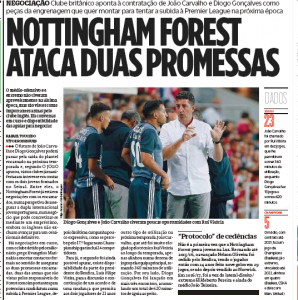 Agreeing with the other claims, O Jogo point out there’s also interest from elsewhere.

Given Portugal’s three main sport newspapers all have this in their Saturday editions, it’s clear someone from the Portugal end of a deal wanted it to be reported.

That could be a plan to encourage more interest.