Once a daily feature in the big Italian newspapers, the idea that Sandro Tonali could leave Brescia for the Premier League disappeared altogether in December.

However, it was always going to come back during the January transfer window, and it has thanks to Corriere dello Sport on Thursday.

The Italian newspaper make it very clear that Juventus are in the lead to sign the young midfielder, but could face competition from wealthy Premier League clubs, like Liverpool, when the time to sign him comes.

Normally sent to the two Manchester clubs (they are also mentioned in Corriere’s article), the inclusion of Jürgen Klopp’s side here is quite interesting, since it’s been a while since we’ve seen them linked to Tonali.

Towards the end of January 2019, a few days after Massimo Cellino, Brescia’s owner, admitted that Liverpool had ‘called him’ about the 19-year-old, the Premier League club sent a scout to watch him in a 4-4 draw against Spezia. 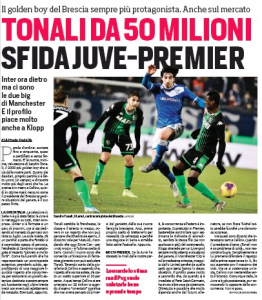 A year later, and that interest hasn’t gone away, as Corriere dello Sport believe the Reds are one of three English sides after him.

They reiterate that Klopp likes Tonali ‘a lot’, and that Liverpool are ‘always attentive’ to deals of the sort, as they continue to try and improve their already very strong squad.

That being said, the midfielder won’t be a bargain like Takumi Minamino, as Cellino is looking to get €50m ‘minimum’ from the Italy international’s sale, knowing full well that players like the 19-year-old don’t come around very often.

It’s a steep price, but with already three caps under his belt and 18 starts from a potential 18 in Serie A for his club, the youngster is certainly proving he would be worth such an investment.

Player confirms he will move to Norwich next season – ‘Firmly...