Massimo Cellino will be best known in England for his time as owner of Leeds United.

The Italian has a colourful reputation and is known in Italy as ‘the manager eater’.

Before Leeds, he owned Cagliari, and purchased Brescia in 2017, after selling his shares in the Championship club.

As a stroke of luck, although Cellino would insist he’s played some part in the youngster’s development, Sandro Tonali has appeared at Brescia and despite playing in Serie B he’s already considered a future star of Italian football.

The 18 year old was called up to Italy’s senior squad in November 2018 by Roberto Mancini, and that really set the transfer rumours off.

Cellino has been speaking to Corriere dello Sport, and part of their headline quotes him as saying “Liverpool have called me” in reference to Reds interest in the midfielder.

However, deep within the article it’s stated that chat was a ‘little while ago’, maybe around the time of the international call up. 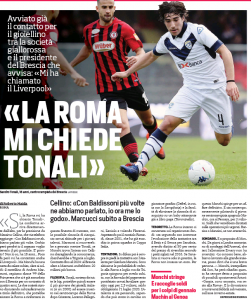 Brescia’s owner also said AS Roma have been in contact, and it’s clear he feels there’s widespread interest.

In the past, Cellino has said he’ll only sell Tonali to a club he thinks is right for the youngster, rather than just going for the biggest fee.

That’s something for Liverpool to consider in any future approach.